A legacy to treasure 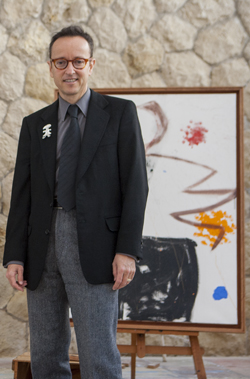 INTERVIEW with The grandson of world-known artist Joan Miró

How do you remember your grandfather? How was his personality?

I have fond memories of Joan Miró in the company of my grandmother, Pilar, during birthday parties, gatherings on Sunday and other family occasions, in any case, I was very young. When Joan Miró died, I was 15 years old.

Did you spend much time with Joan Miró as a child?

My grandfather spent a lot of time working in his studio, he also travelled frequently to Barcelona, Paris and other countries for work and exhibition openings.

Did you have a good relationship?

I had a good relationship with him, however as I mentioned he spend a lot of time working.

The memory that stands out the most is when I found one of my toys in the studio. I thought I had lost it. I couldn’t understand why it was there... later I realized why when I saw the toy’s form moulded into a bronze sculpture.

Did Joan Miró teach you art?

No, it is curious many journalists ask the same question. He did however spend time drawing with his daughter M. Dolors, my mother. The family have kept the drawings from those times.

How would you describe his daily routine?

next to the fire place.

Miró also took daily walks through the almond groves around the house and studio.

What did you learn from your grandfather?

Looking back at it now, I admire his honesty and simplicity on the one hand, and his desire for knowledge. Joan Miró had an innate curiosity.

Despite his life was, hard his art is playful and very colourful, what do you think inspired him the most?

Joan Miró gathered inspiration from several sources throughout his life. He embraced the nature and landscape from the surrounding of his farmhouse, near Mont-roig. Poetry, music and folk art also inspired his work heavily.

What message did you take from his work?

I admired his work ethic and ability to adopt different artistic disciplines: painting, sculpture, ceramics, graphic works, illustrated books and textiles. This helped him reach out to a larger number of people.

Do you have any favourite artwork of Joan Miró, why?

My favourite painting is La Naissance du monde, 1925, it is kept at MoMA.

Miró vs Picasso and Dalí. What was the difference in art of the most famous surrealist?

Picasso was an artist with an excellent academic discipline that had an ability to break with the mold and discover new grounds in art. Dalí explored the human subconscious influenced by the Bosco, and Joan Miró created a unique poetic language in his painting akin to musical notes.

Why do you think most artists become famous after they die?

I do not know. In any case, it does not apply to Joan Miró since he was successful during his lifetime. It did however take some time for him to be recognised in Spain. Joan Miró was fortunate to have good art dealers like Aimé Maeght in France and Pierre Matisse in America that helped spread the influence of his work.

Do you know any Slovak artist that you admire?

I was particularly struck by Josef Jankovic when I visited Danubiana Meulensteen Art Museum for the opening of the Joan Miró in July 2016. I was attraction to the human figure and the way it emphasizes parts of the body, there are certain parallel with Miró, especially in the arms, hands and feet. Miró used to say that his strength rose from his feet, a metaphor that rooted him to the earth.

Are you doing art in your free time? What are your other interests?

I write poetry and do performances, that I write and direct personally. I keep my work separate to the art market, so I avoid a confusion as the grandson of Miró.

How people react when they found out you are Joan Miró’s grandson?

At first with admiration and later with respect towards the challenges I face to keep alive the memory of an artist like Joan Miró.

What is the main reason that you took over Joan Miró heritage?

Admiration for the work and life of a talented artist who helped create a better world. We also support and assist the three foundations, Fundació Joan Miró in Barcelona, Fundació Pilar i Joan Miró in Mallorca and Fundació Mas Miró in Mont-roig, who continue to do fantastic work.

What would be Joan Miró’s message for the Young artists to attract or “touch” people’s attention (to become known or successful)?

Be true to oneself, have conviction in the work they do and use art to convey a real message to the world, not simply as a decorative ornament.